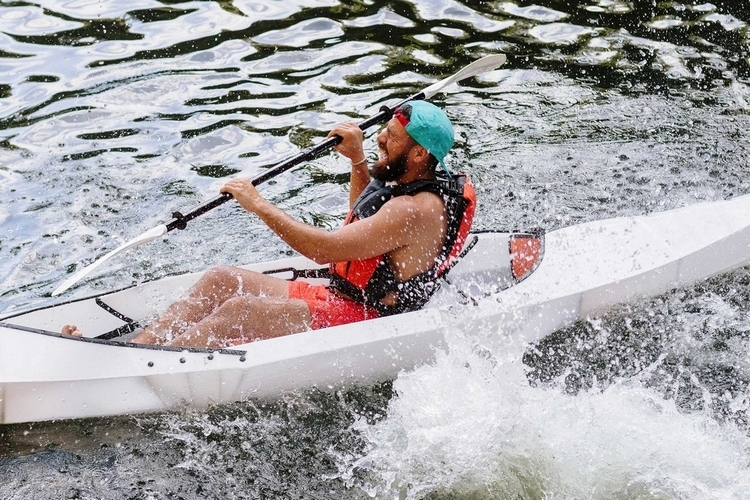 Whether you’re spending a clear summer day on a lake, a river, or a beach, a kayak is one of the best recreational gear to have on hand, as it gives you access to unfettered exploration. It’s relatively easy to handle, too, requiring very minimal skills, provided you stay within calm areas of the water.

There was a time when transporting a kayak to your summer trips required some commitment: their large, heavy, and bulky frames just weren’t the easiest things to load up in your car. Not to mention, they made it hard to haul one on your shoulder while you go on foot towards a remote inlet. Fortunately, that has changed in a big way the last few years, with the growing popularity of collapsible kayak options. Inflatable kayaks first made the rounds, giving paddlers a functional watercraft they can simply inflate once they’re on site. Then, Oru changed the game significantly with their debut of a folding kayak, which is even simpler, lighter, and more portable than inflatable models.

Nowadays, inflatable and foldables are the two best options for those unwilling to deal with the hassles of a full-fledged hardshell kayak. Inflatables tend to be heavier, even more so when they get wet since their fabric shells can carry a lot of water weight, making foldables the more portable option. However, inflatable kayaks also tend to be more versatile in the water, handling rougher conditions and support heavier cargo a lot better than most foldable options. Basically, both have their pros and cons, but whatever you choose, it’s all but certain they’ll bring you plenty of fun in the water.

These are the best foldable and inflatable kayaks today. 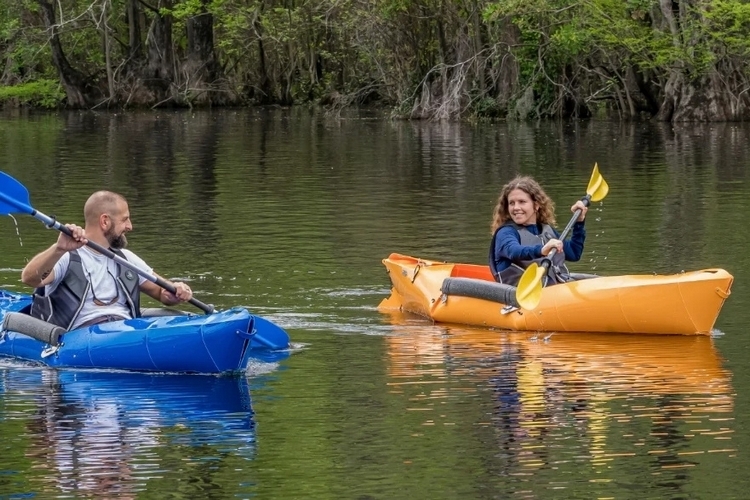 Looking for something affordable that will let you explore calm waters safely and reliably? Look no further than this 9.7-foot model from Tucktec, which combines a plastic hard shell construction, a wide flat bottom, and a snap-up tracking fin to deliver excellent performance and stability in calm waters. It has a spacious cockpit that can accommodate a decent load of gear (it supports 300-pound payloads), although the seat isn’t the most comfortable you can find among the options in this list, so you’ll probably want to consider swapping it out for a compatible aftermarket seat at some point.

It weighs a light 28 pounds, with a design that folds into a rolled-up bundle during collapse. Truth be told, we find this even more convenient to transport than Oru’s suitcase-style design, as it feels like you’re simply carrying an oversized (and way overweight) yoga mat. The whole thing (save for the seat) is made from a single flat sheet of plastic, by the way, so there are no open seams whatsoever where water can get through (other than the cockpit, which is why it’s strictly for calm waters). 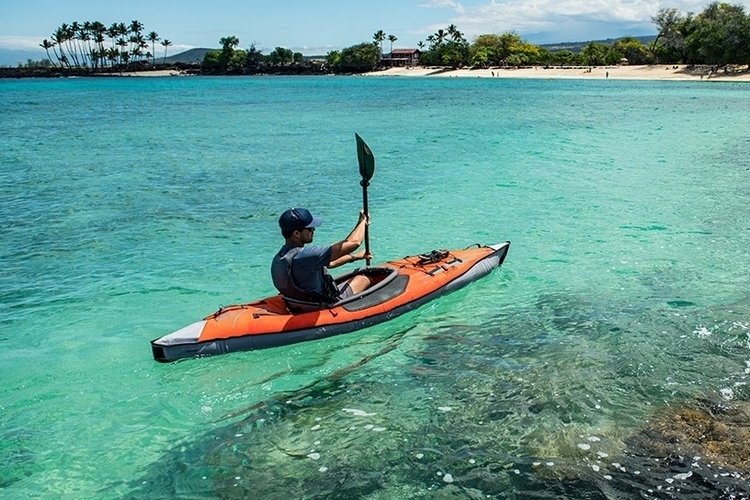 A hybrid folding and inflatable model, it combines the convenience of inflatables with the faster paddling that rigid boats allow, courtesy of aluminum ribs in the bow and stern that allow for greater control and more consistent tracking. Seriously, you do some unfolding, then blow it up to finish the rest of the setup. It’s durable, too, sporting a shell made using three layers of ripstop fabric with a double PVC coating, allowing it to handle any sharp and rough objects both in and out of the water, while multiple air chambers ensure it can stay afloat despite incurring a puncture. Other details include bungee lacing on the deck, molded rubber handles, adjustable back support, and a weight capacity of 300 pounds. 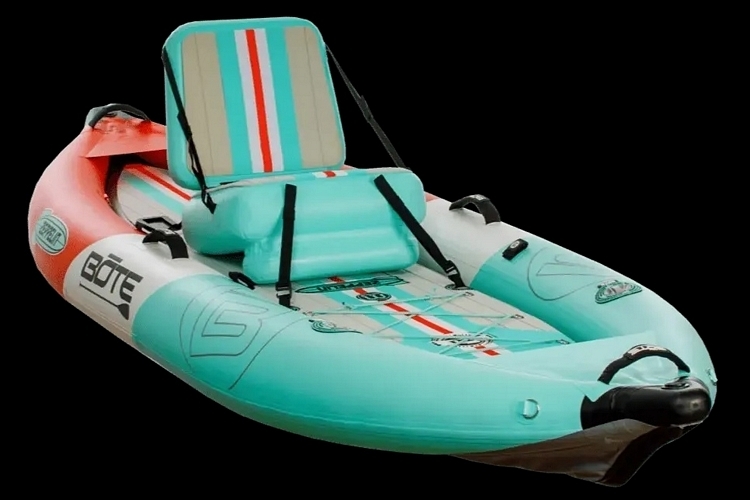 It’s not the lightest kayak on this list at 37.5 pounds. However, it’s inarguably one of the most fun and simple watercrafts you can take for a fun day out in the water.  This inflatable measures just 10 feet long, with a cushy inflatable seat and a large spacious cockpit that can accommodate a generous load of gear. Seriously, you can throw in a cooler, speakers, and a whole load of stuff on there with more room to spare, with the kayak supporting total weights of up to 300 pounds. It’s incredibly stable, making it easy even for total novices to handle, with plenty of nice touches like bungees for holding down gear, slide-in RAC receivers for attaching compatible accessories, and a self-draining hull that ensures you won’t end up lounging around in a puddle. Inflating the whole thing takes around five minutes, so setting up won’t take all that long, with each of the three chambers coming properly labeled with the recommended pressure, so you’ve got proper guidance the whole time. 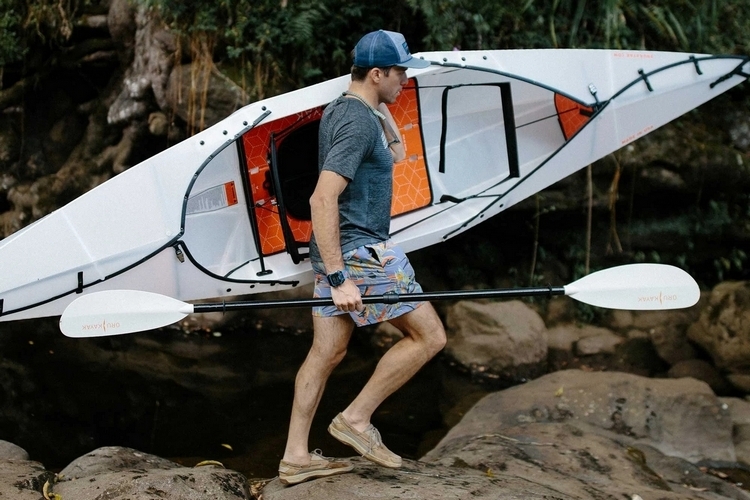 While it’s neither as small nor as light as some of the more compact models in  Oru’s foldable open-cockpit line, the Beach LT is our pick for its more versatile capabilities, with its narrow width, low ride height, and 12-foot length providing excellent stability and traction when you’re out in the water, while the plastic hull limits drag to help you paddle at a brisk pace.  All this won’t just make for a smoother experience out in the water, which makes it ideal for newcomers, it also lets you carry more gear, with the outfit rating it to support up to 300 pounds.

It’s made from a double-layered, custom-extruded polypropylene material that makes it incredibly tough, allowing the kayak to slide on rocks, bump into debris, and hit sharp objects without damaging the hardshell. Being an open cockpit boat, it’s designed strictly for flatwater, as any waves will undoubtedly create a puddle inside in short order, with no way to easily drain it back out. On the upside, that open cockpit, along with the 300-pound payload, makes it ideal for carrying a good load of stuff. Some nice touches include a foot brace (something many collapsible kayaks don’t offer), a cushioned seat, and a fully-adjustable seatback. 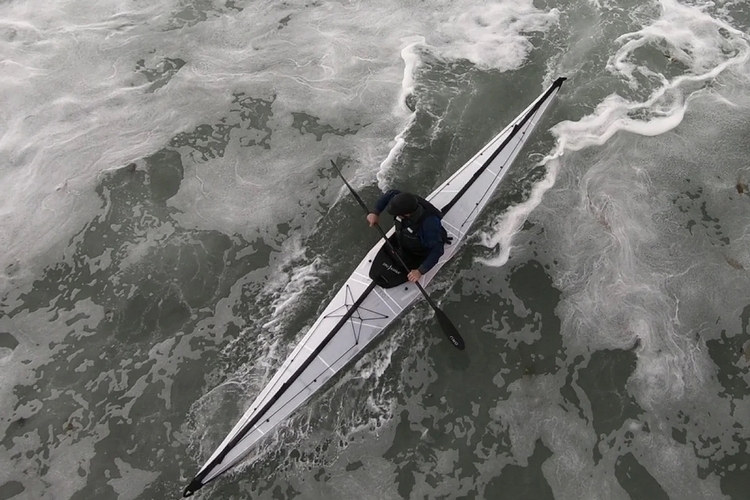 The Coast XT is Oru’s top-of-the-line performance kayak, which is more fine-tuned for challenging conditions than the open-cockpit models in their line. Measuring over 16 inches long and weighing 32 pounds, its compact and light enough to haul any time you go on foot, while being far more versatile than typical folding kayaks, as its nimble enough to take on waves, currents, and windy days out in the ocean (yes, it’s designed for open sea paddling). It’s not as easy to handle as the Beach ST, by the way, so it’s a boat best reserved for those with a little more experience under their belt, with the fast and sporty character making for a really fun boat to take around the water. Seriously, you can use it to perform rolls if you want to. The boat supports up to 400 pounds via storage slots in the front and back, with the option to attach a spray skirt if you want to stay dry when dealing with waves or rain. 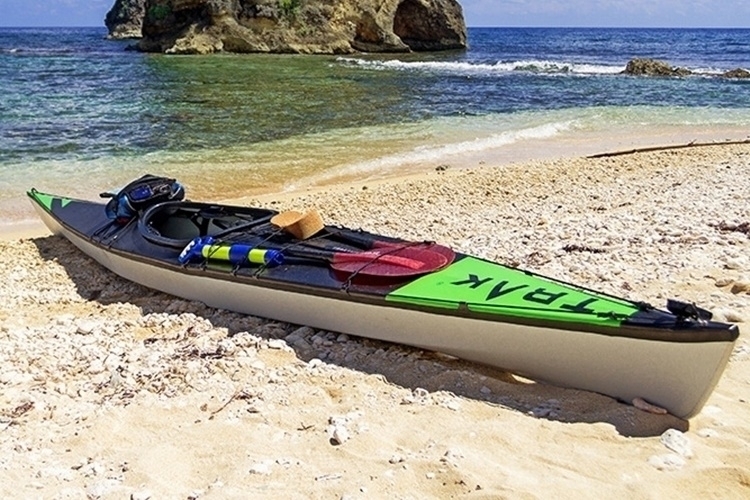 This 16-foot long sea kayak is designed to assemble rather than simply unfold during deployment, with a process that’s just a tad more involved than typical folding kayaks. It’s heavy, too, coming in at 44 pounds. For the hassle of having to manually put together the aluminum rod frames, polyurethane skin, and various other components on site, though, you get arguably one of the best-performing collapsible kayaks you can get. It has a unique design that allows you to adjust three hydraulic jacks in the hull, one on each side and the keel, allowing you to change the boat’s riding characteristics on the fly, making it easily the most versatile kayak in this list. The closed cockpit, along with the included sprayskirt, does a great job keeping water out while riding through waves and inclement weather, while generous padding on the seat and thigh braces keep even rough rides relatively comfortable. If you want a portable kayak that can perform like a hard shell, however, this is your best bet, provided you don’t mind the admittedly premium price.