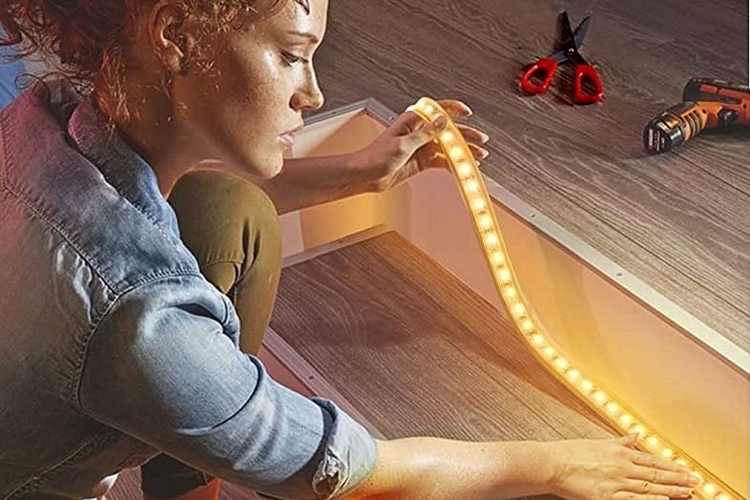 While overhead lights and strategically-placed lamps can handle most of your lighting needs at home, there are some areas of the house that can probably use a little added illumination. Maybe, the closet’s a little too dark to easily see when you’re looking for that particular shirt you want to wear to a big interview. Maybe, the kitchen countertop can use some direct light, so you can have a clearer view of everything you’re chopping during dinner prep. Maybe, your life will be just a little easier when you have lights inside cabinets, drawers, and even under the bed, where you have boxes upon boxes of stuff stashed. Sure, you can grab a flashlight and use it each of those times, but you can also add a semi-permanent lighting fixture on there in the form of LED strip lights.

Also referred to as LED tape, rope light, or ribbon lights, LED light strips are exactly what they sound – a long flat strip with LEDs in front and an adhesive backing. While some are sold as short strips of around a foot or two long (typically, rigid ones with high brightness), most are available as 15-to-50 foot rolls that can be cut at various lengths, allowing you to install just the right amount of “tape” you need to cover a section, with various options in brightness levels, power source, colors, connectivity, and more.

These are the best LED strip lights for your custom spot illumination needs. 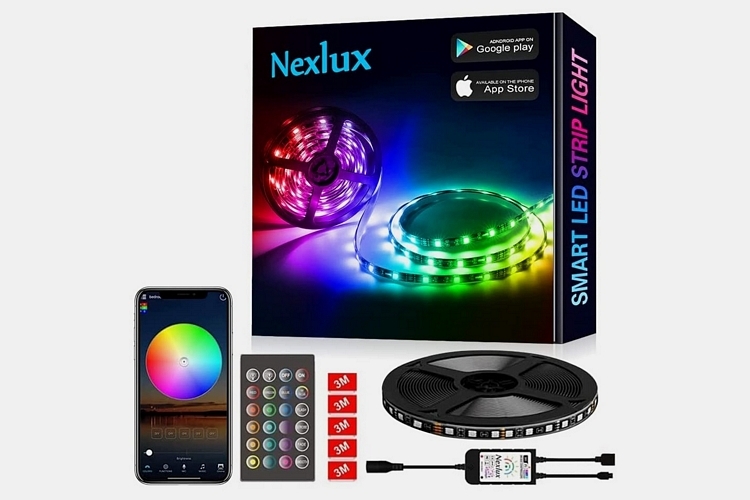 If you don’t need a waterproof LED strip, this 16.4-foot option offers an excellent option, with its slim build, multi-color lighting, and seamless operation via the Magic Home Pro app. For a non-waterproof, purely indoor LED strip, it’s actually quite robust, with a protective rubber coating on all the LEDs and connectors, which makes us think it should be able to withstand the occasional splashes (you know, the kind it can take when you install it anywhere in the kitchen). It’s not the brightest (and the white light has a blue tinge to it), by the way, so don’t get it if you want maximum illumination, although it is bright enough for typical strip light applications, all while being especially useful for accent lighting because of its versatile features.

Onboard Wi-Fi allows you to connect it to it via the companion app anywhere you are, with support for IFTTT and voice commands (via Alexa and Google Assistant). It comes with a dimmer for dialing in the brightness, color adjustments (up to 16 million colors, with both manual and preset color schemes available), schedule timer, and even a music function that will have it pulsing to the beat of whatever tunes you’re playing. 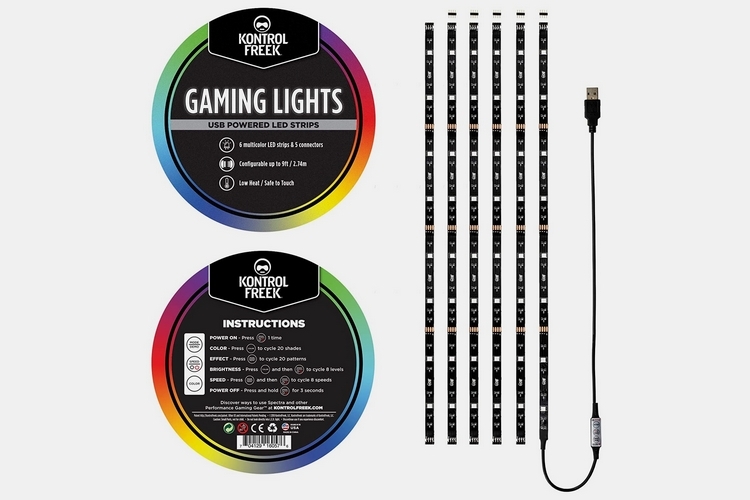 If you plan to install LED strips around your PC setup, media cabinet, or anywhere else where there’s an abundance of USB ports, you might as well get one that draws power from a USB connection. Instead of a single long roll, it comes with six 18-inch multicolor LED strips (for a total of nine feet), which should be an ideal length for those aforementioned applications. It’s not as feature-rich as other options in the list, although they do offer 20 colors, 20 effects, eight brightness levels, and eight speeds that you can adjust through the integrated control panel. 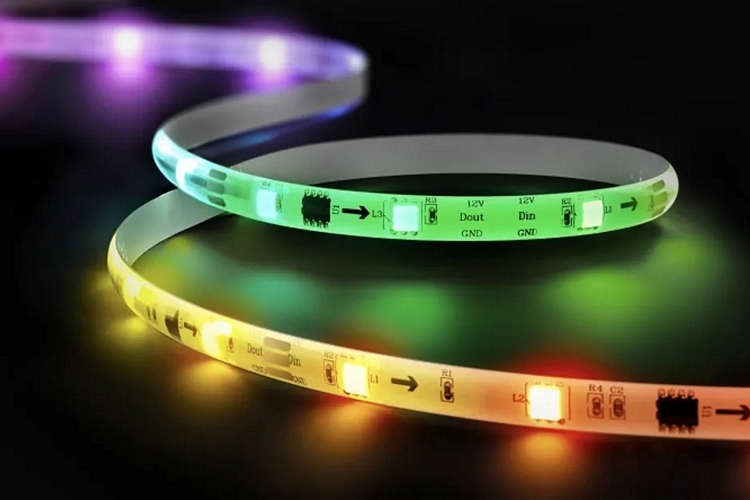 Wyze literally makes economical versions of a whole load of consumer electronics and, naturally, they make an affordable LED light strip, too. It comes in 16.4- and 32.8-feet versions, although the latter is just two 16.4-foot strips that are hooked up to a controller in the middle. What makes this an interesting pick, though, is the amount of smart features available with the LED strip via the companion app.

The app allows you to manually dial in the brightness and color (it offers up to 16 million), complete with preset options and 16 independently-adjustable segments (you can set up to 16 different colors simultaneously) that make ideal for gaming setups and all sorts of fancy lighting effects It has a built-in mic that can listen to music and sync the light to whatever’s playing (if you turn on Music Mode), as well as a Sun Match option that automatically adjusts the color to match the time of day. Other features include voice control support (Alexa and Google Assistant), Vacation Mode (automatically controls the light at various times when you’re away), timers, programmable automations, and a clear epoxy coating that protects the components. If you only need a light that will glow in one color across the entire length at all times, you can also opt for the non-Pro version, which is $10 cheaper. 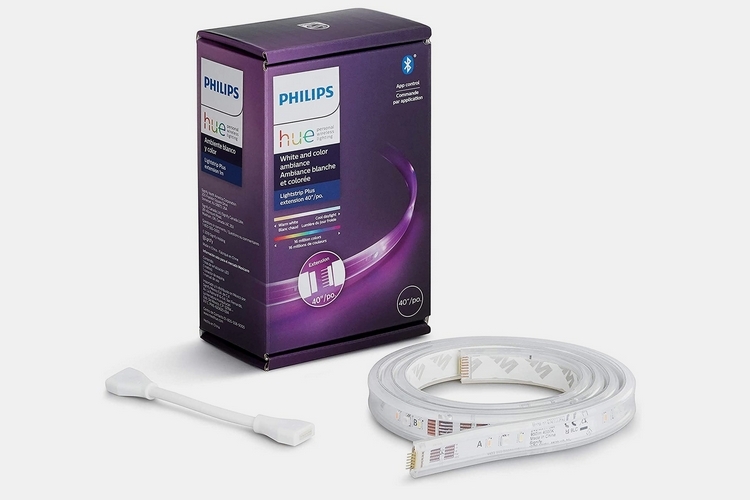 Philips’ light strip offers plenty of brightness, making it useful even for roomier closets and spaces. It’s sold in three- or six-foot strips, each of which can still be cut at designated sections if you need something smaller, although you can also connect strips from a single power source up to 32 feet if you need something longer (do note, you need to connect strips from the same generation or they won’t work together). From the app, you can control up to 10 light strip installations via Bluetooth, allowing you to easily change brightness, color, and temperature. What makes it more attractive is its ability to integrate with the entire Philips Hue ecosystem via the optional Hue Hub, which you can use to integrate it with your existing smart home setup, offering even more automation options. On the downside, it is the most expensive option in the list, so definitely check out elsewhere if you want the best bang for your buck. 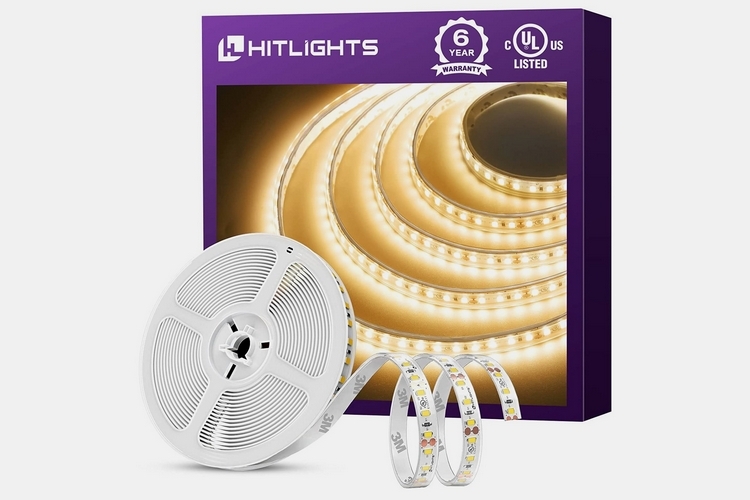 An IP67-rated LED strip, this one is safe to install in outdoor spaces and indoor areas where it might encounter water (e.g. kitchens and bathrooms). The strip is offered in 16.4-feet lengths, with various marked cutting sections for those that need something smaller. Do note, you’ll need reseal the area you cut to ensure it retains the waterproofing (it’s not that hard).

It’s very bright, being rated at 300 lumens per foot, although it comes with no smart options (no app), so it switches on directly into the high brightness setting and stays there. They do offer an optional dimmer switch if you prefer being able to fine tune the amount of brightness, although we have to say, we love the warm white glow of this LED strip, which is rated at 3000K (you can also get them in 4000K and 5000K, respectively). Basically, it’s the LED strip you get if you want a heavily-waterproofed model  and won’t mind not being able to enjoy any smart options. 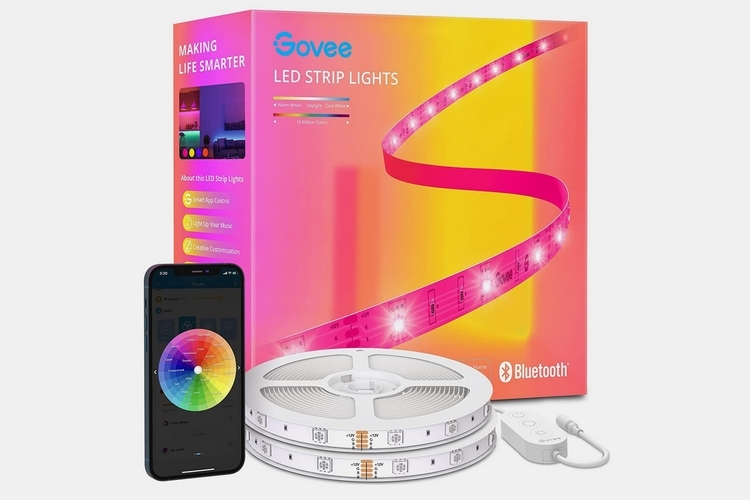 Need the longest strip light you can get? Pick up this 100-foot roll from Govee, which comes with multi-color LEDs that can shine in a single color simultaneously (they have a similar length that can glow in different colors, albeit at over twice the price), with plenty of features you can control from the companion app. With a few taps, you can change color (16 million hues), adjust brightness, and access the Light Studio, where you can play around with the lighting. There are also over 64 preset lighting effects and a built-in mic that lets it sync the light to any sounds playing if you turn on the Music Sync mode.