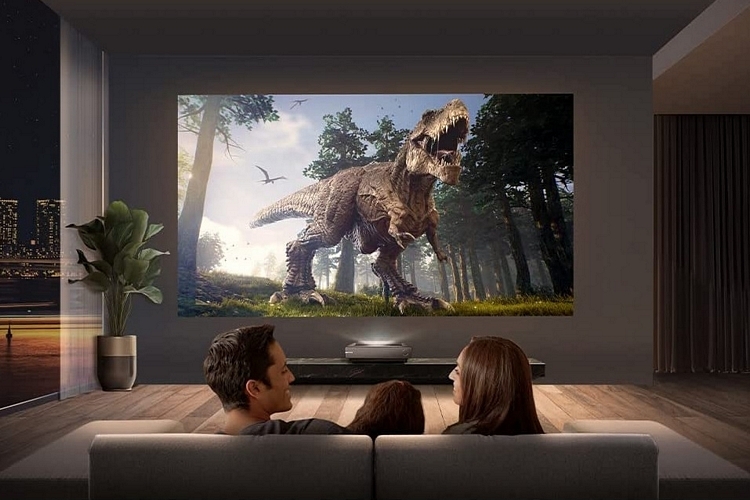 For many people, modern projectors have become a more convenient alternative to big screen TVs, as they let you enjoy the same big screen viewing without having to deal with an actual gigantic display. Problem is, standard projectors require a lot of space to actually project large images, making them pretty inconvenient to set up anywhere other than dedicated home theaters.

Short throw projectors have relaxed those requirements a bit with their ability to project the same large screens at distances of just six feet or less. While that has made them more suitable for smaller living rooms, they still create for a messy-looking setup that’s not quite the streamlined home theater experience most of us desire.

If you want the cleanest-looking projection setup, ultra-short throw (UST) projectors are the way to go. Using complex lenses that bend light at an angle, they’re able to beam large 80-inch screens on a projection surface while sitting just anywhere from a few inches to a couple feet, at most. That’s right, it can sit nearly flush against the wall while projecting a giant screen on it, making the entire experience feel more like regular TV.

These are the best ultra-short throw projectors in the market today. 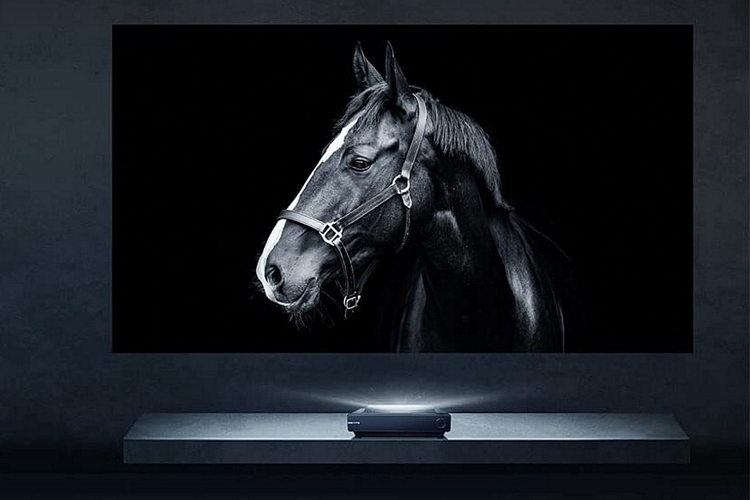 Able to project big screen images between 90 to 130 inches, this UST projector is more compact than most at 20 x 13 inches (width x depth), making it easier to position than other products in the category. That large screen displays images in 4K resolution, with crisp images, dynamic colors, and deep black levels that are just downright stunning to watch. It has a claimed 2,200 lumens of brightness, which makes it watchable in well-lit rooms, provided you use a proper projector screen with ambient light rejection (ALR). On the wall or on an inferior screen, though, the difference when watching with the lights on and without is night and day, so you’ll really want to keep the lights low (and draw in the blinds) if you want to enjoy the exceptional picture quality it delivers. It comes with 30W speakers.

By the way, this projector ships without its own screen unlike other UST projectors from the outfit, instead incorporating motorized focusing that allows you to use it with your projection screen of choice. It’s also one of the easiest laser projectors to set up, making it feel like a true plug-and-play device. Do note, it runs a version of Android that, for some reason, doesn’t have a Netflix app, so you’ll have to plug in a separate video source if you want to watch the new season of Stranger Things. 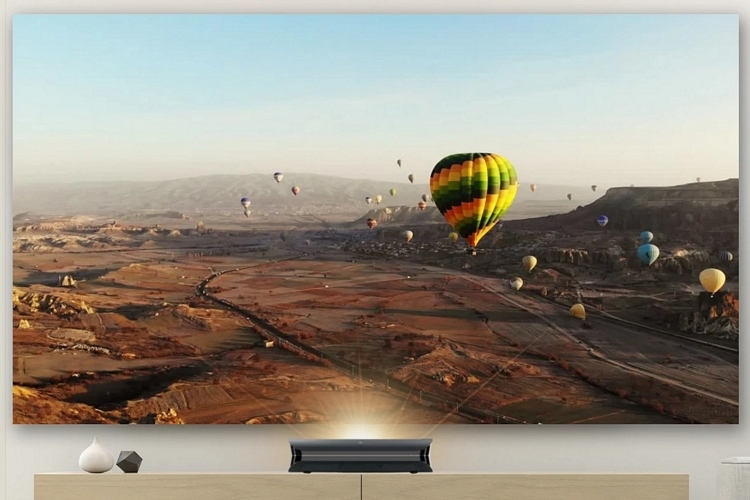 You may not be familiar with the name, but this new player in the projection space is making big moves with this triple-laser model, which can throw up 4K images between 80 to 150 inches. It reproduces pictures in full 4K with outstanding contrast, incredibly vivid colors, and impeccably sharp details on par with the top offerings in the category. The standout feature here is the brightness, which peaks at a whopping 3,500 lumens, making it impressively viewable with ambient light even without an ALR screen. Use it with such a projection screen and that brightness is enough to keep things looking great despite washing out in the path of direct light sources.

It comes with 36W stereo speakers that do a decent job of filling the room with the sound of whatever you’re watching, although you’ll still have a better time hooking it up to a soundbar if you have one. Unlike most projectors that use Android TV, this one runs straight Android 9, so you get more app options, with a Fire TV Stick bundled if you prefer a more TV-specific interface. On the downside, the fan is admittedly a little loud, although it’s low enough that it can fade away in the background once you get into whatever show or movie is playing. 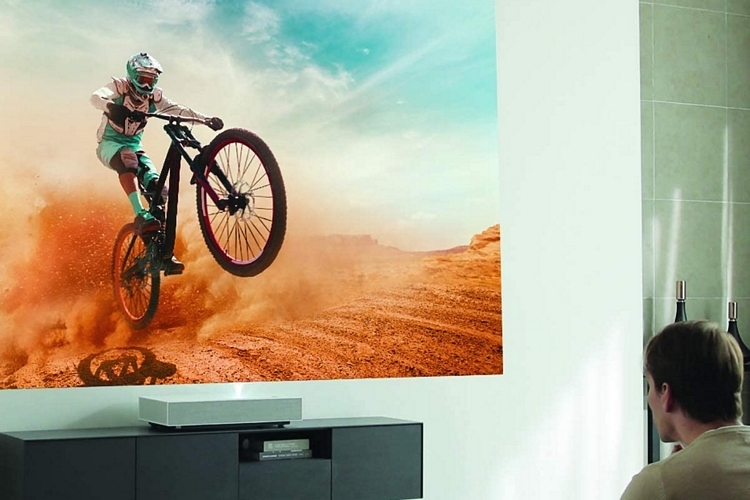 While this will likely be replaced on many lists by the recently-announced LG HU915QE, this triple-laser projector remains one of the best in the category. Able to create a 120-inch screen at just 7.2 inches away from the projection surface, it creates a 4K picture with bright images (2700 lumens), fantastic colors, and smooth motion handling. While contrast is pretty strong at a 2,000,000:1 ratio, it doesn’t have a dynamic contrast system, making the overall picture less stunning when playing darker scenes (as in, most of the image is black, which is common in horror and sci-fi) when compared to similar products in the price range. For everything else, though, especially with bright HDR10 videos, it produces some of the best pictures available, which more than makes up for the omission. Features include built-in speakers, the same smart interface found in LG’s TVs, and intelligent assistants built-in (Alexa and Google Assistant). 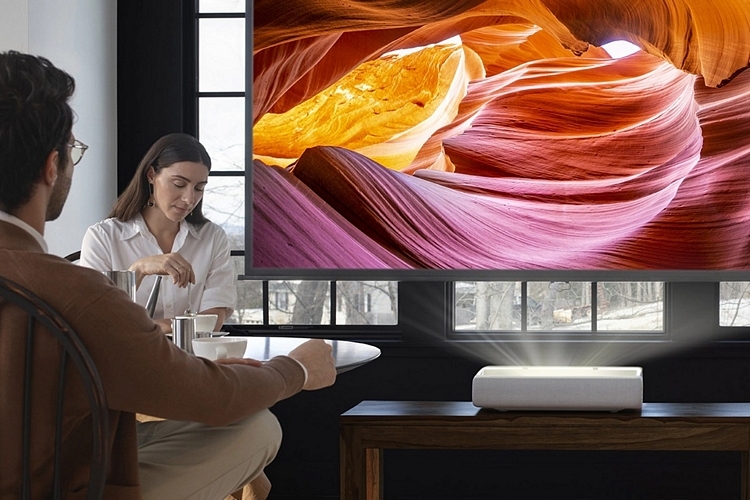 This UST triple-laser projector can throw a 130-inch screen picture on the wall, with 4K resolution, vibrant color reproduction, and an overall picture quality that’s hard to tell apart from a traditional TV (yes, it’s that good). Even better, it produces a picture that’s way bigger, considering how most households stick to big screen TVs that are 75 inches or less. With a 2,200-lumen bulb, it’s also intensely bright, allowing you to clearly see details in the picture even in a well-lit room with a proper ALR screen. The only way to really dull out the picture is to put it in the path of direct sunlight, but other than that, this thing enables, arguably, the most TV-like viewing experience you can have on a projector.

It inherits much of the smart features in Samsung’s TVs, like the motion handling system, the HD upscaling, and numerous presets, so you get topnotch picture quality with a wide variety of content and viewing settings. You also get a 40W speaker built-in with 4.2 channels, so there’s a good chance the audio here is much improved compared to your last TV. Other nice features include three HDMI slots, a Freeview HD tuner (so you can watch broadcast TV), and, of course, all the usual smart TV features via Samsung’s Tizen platform.

If the price is too rich for your tastes, they also offer a 120-inch version that’s a whopping $3,000 less.